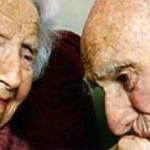 While going through an old chest of drawers in his house, a 99-year-old man discovered love letters written from his wife to another man during a secret affair in the 1940’s. Harboring a guilty conscience after all these years, the wife confessed everything prompting her husband of nearly eight decades to file court papers asking for a divorce.

The couple met in the 1930’s while the man was posted as a young Carabinieri officer to Naples. They have five children, a dozen grandchildren and one great-grandchild.

The husband hopes to soon be seen about town with a sexy 60-year-old who only loves him for his money.